Long after the physical scars of abuse have faded, emotional and mental wounds live on.

Worse, damage born of abuse isn’t limited to a single life. Left untreated, these wounds can be passed from generation to generation.

It almost happened to Denean and her son, Chance.

As an adult, life for Denean only got worse. At 24, she started using meth. She got divorced and soon got involved with another man. But he used drugs. And he was in and out of prison. And he physically abused her. The only bright spot in that relationship was that she had a son.

Motherhood isn’t easy, and without ever having addressed her childhood or adult trauma, it was too much for Denean to handle. She turned back to drugs for relief from the stress, but the drug use made her an angry person, throwing her into rages, which in turn traumatized and stressed her little boy.

Chance was constantly terrified of his own mom—and over time, he grew angry just like her, throwing tantrums that mirrored her behavior. Denean never abused Chance physically, but she knew that his childhood, with all its trauma and stress, was turning out too close to her own. She didn’t want that for him, but she didn’t know how to take care of herself, much less her son.

Mother and son couch surfed. At one place, someone gave drugs to Chance, who’s only in grade school. “His drug use escalated his anger,” Denean remembers. “I was out of control; he was out of control; life was unmanageable in every way.” When the authorities took Chance away again, Denean was actually relieved. At least Chance would be with someone who was able to care for him.

She wondered if she would ever be a good mom.

I could say at this point that Denean and Chance were fortunate someone pointed them our way, but you and I know it was more than that.

By God’s grace, they made it to Gospel Rescue Mission. And thanks to caring friends like you, we were here to help both mother and son.

We quickly took Denean into our recovery program, where she’s learning a new way of living. She’s also taking parenting classes and learning how to be the mom Chance needs. And her son? He got a second chance as well. God’s timing is remarkable!

This year, staff members were trained in the Nurtured Heart Approach®. It cultivates greatness and builds relationships with children who have suffered trauma, and we’re doing this with Chance. We also have staff trained in grief recovery, which helps them address myriad forms of suffering experienced by our guests…of all ages. 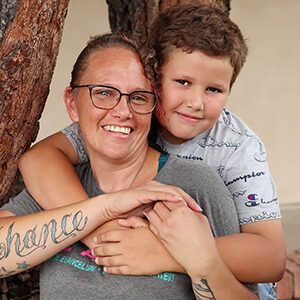 “I thought I was going to be like a fighting kid,” he says, “that would always go to jail like my dad, and come in and out.” But Chance has a different self-image now.

Denean and Chance are living a new life now, and Chance has come to understand God’s love—he realizes that God uses people to accomplish His work. As Chance says, “He put people in places to help us.”

This is why I’m writing to you today and asking for your help. I believe God has put you in a place to help parents like Denean and children like Chance, to find new life in Christ. With your partnership, we can make that happen for another family in need.

It all starts with the compassion of a friend who’s willing to make a small sacrifice for the sake of children and families who are hurting.

We need you…because another family needs a new beginning. Would you please give generously today?

P.S. Did you know that September is National Recovery Month? What great timing to support people like Denean who want to break the chains of addiction!