So much of Gospel Rescue Mission’s success in transforming lives stems from the fact that much of the staff can identify, one way or another, with the struggles of the men, women, and children we serve. Victor Hightower, our Development Manager, is no exception.

“My drinking was excessive in college. I spent way too much time partying and not focusing on my education. I had a problem, but I didn’t recognize it until way after college, when it was too late to focus on my undergraduate education.”

Victor was able to manage his budding alcoholism for a while. He found success in the Army, following in his father’s footsteps, and rising to the rank of Captain. But serving in the military wasn’t his passion. In his heart, he longed to become a screenwriter. It was when he left the Army, and moved to Los Angeles to pursue his dream, that his drinking came back to haunt him.

“I lived in LA for 17 years and wrote four screenplays, but never sold one. Once again, I spent way too much time partying. I became depressed. I regretted that I had wasted so much time. The drinking got worse. It got to the point where I was drinking in the morning before work, on both of my breaks, my lunch, and on the bus ride home.”

Recognizing he had a problem, but not willing to admit it yet, he moved to Tucson to be with his family.

“I got a job as a chef, but I was still drinking so much, I couldn’t function. A few of my coworkers, thank God for them, took me to detox at the VA. When I got out, I had finally gotten to the point where I was just tired. I started going to AA meetings, got a sponsor, and began to learn the sayings you hear repeated in recovery meetings. The one that stuck with me was ‘one day at a time.’”

If God would help Victor be the best person he could be for just this one day, then he knew that God would help him with all the days to come. That and focusing on helping others gave Victor what he needed to win the battle against regret and alcohol – one day at a time. 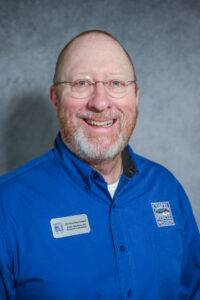 “Doing something for someone else is an important part of staying sober. It’s one of the secrets to happiness.”

Today, Victor lives that out while using his past experiences to serve men, women, and children here at Gospel Rescue Mission, with excellence. He’s also writing again. He took his first screenplay and turned it into a novel, which he plans to self-publish later this year.

“There’s a culture here of treating people with love and dignity and respect, built on a philosophy of grace that’s a wonderful thing. I’ve been here over four years and I love it. God’s grace abounds everywhere here. I’m excited each day coming to work.”