Kenny is a survivor. When he was fifteen years old, his father committed suicide in front of him. And shortly after that, his mother kicked him out of the house. Traumatized by the image of his father’s death, Kenny had to make it on his own. He started smoking weed and experimenting with other drugs like cocaine and meth just to dull the pain. Kenny learned to support himself and his drug habit by panhandling on street corners. Yet, despite all of the difficulties, he still managed to graduate from high school. 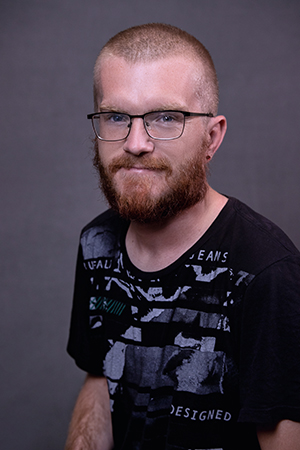 For more than ten years, Kenny survived the streets. Until, one day, he had enough. Kenny was tired of living for drugs. He wanted the eternal emptiness to end. Kenny attempted suicide. But he woke up in a hospital bed, connected to an IV with his arm bandaged. Kenny was released as soon as he was stable, but the nurses told him about Gospel Rescue Mission. He had heard about GRM from his mom when he was first on the streets, but Kenny wasn’t ready for help. Now that he was, he walked up to the Welcome Center at 4 a.m., and we welcomed him in.

It has been ten months since Kenny entered our Recovery Program, and he has been clean and sober ever since. When asked about his experiences here, Kenny said, “it’s been the best thing that happened to me in the last 15 years. I mean, I don’t even think about drugs anymore.” And, through all the classes and the programs at GRM, Kenny has found God and has hope for the future. “For the first time, I’ve gotten over my trauma. I released it to God!”

Kenny survived his trauma. Now he is learning how to live. And, for the time being, Kenny is just taking things one day at a time, but he has plans to study computer science because of his adeptness with electronics. He wants to finish his education and go to college. And our partnership with Pima Community College will open up opportunities for Kenny to pursue his dreams. Yet, whatever happens in his future, we pray that Kenny continues walking in God’s ways, remaining firm in his recovery.