You helped provide a SAFE HAVEN from the heat for Robert.

Ask Robert to share his life story, and he can capture it in four devastating words: “I should be dead.”

He graduated from trade school and launched into a good job with Motorola, he was asuccessful professional in the IT field, with a wife and two small children. He was also a professional musician, playing bass with a band with continuous paying gigs. But he lost it all — to drugs. 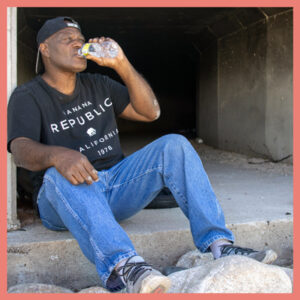 To support his drug habit, he engaged in criminal activity. Until this past summer — when he wasn’t doing long prison sentences — Robert spent 30 years homeless, mostly living on the streets, literally begging people for money … soaking his clothes in a McDonald’s bathroom sink and wearing them wet just to survive the brutal summer heat.

During last summer’s heavy rains, Robert was miserable as he was covered by swarming mosquitos on a city sidewalk; two strangers rushed to douse him in insect repellant. They may have saved his life.

It was the miserable life of what Robert calls a “full-time addict.” Over the years, Robert’s personal possessions were stolen again and again. Five separate times, he was held at gunpoint. But each time, by some miracle, the trigger wasn’t pulled. God had a plan for Robert’s life.

He tried recovery programs, but he always fell back into drugs, crime, and trouble with the law. Someone on the streets suggested he try Gospel Rescue Mission, but Robert snorted at the “Christian” program: “I’ll never go,” he sneered. He called the idea “crazy.”

Yet God didn’t give up on Robert. God was still ready for him.

Month by month, year by year, Robert’s health deteriorated. His energy drained away. Finally, one miserably hot day, slumping at a bus stop, he began weeping. “I sat there and cried, and I asked God to help me.” 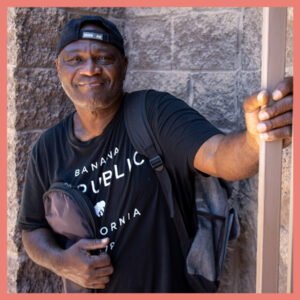 God did. Almost as if, after decades of being ignored and resisted, Robert’s heavenly Father was just overjoyed to pour out His love! It’s like Jesus’ parable of the Prodigal Son, where the father sees his long-absent boy from afar coming back home, and the father goes running to meet him and hug him.

That’s the kind of welcome Robert found here — thanks to you.

He was astounded by the love. With love, grace, dignity, and respect we welcomed him in and provided him three meals a day, a safe and comfortable bed, and the basic necessities to begin again. We connected him with medical, dental, and optical care. And we introduced him to his Savior. We got him into recovery, counseling, and classes. We watched this long-time homeless person blossom in the light of God’s love.

It happened thanks to you. Your support for Gospel Rescue Mission brought Robert in off the brutal streets and out of the heat. Today, Robert is thriving. He’s ministering to others. “People come in broken,” he says. “After a couple of months, you see them grow.”

And it’s for their sake that I’m asking for your help again today. Robert survived the horrific elements of the environment and streets, only by the grace of God! But someone else is out there suffering right now. They need help. They need Jesus.

Will you partner with us to make a place for them? Not just a place in the shade. But a place at the banquet table. A place in God’s family.

So your gift will save lives — literally, physically, and most importantly, spiritually. Someone will thank you in eternity for the gift you give today. I hope to hear from you soon!

P.S. Don’t delay. The Arizona heat kills an average of 243 people every year, most of them homeless. Last year, 552 died from heat-related causes. Tucson broke a 125-year-old temperature record.