I can hardly fathom giving meth to a 10-year-old.

But it happened to Roseann.

By age 10, she was sneaking out at night and partying — drinking hard liquor, using meth, and experimenting with a wide range of other drugs. She dropped out of school in 10th grade, an addict out of control.

At 17, Roseann was pregnant. Her boyfriend, also an addict, was out of work; Roseann nannied for $20 a night, trying to make ends meet. But they were evicted from their apartment because of drug use. Their addiction drove them from one place to another, one job to another. Another pregnancy — another daughter — and more moving from place to place, like nomads. 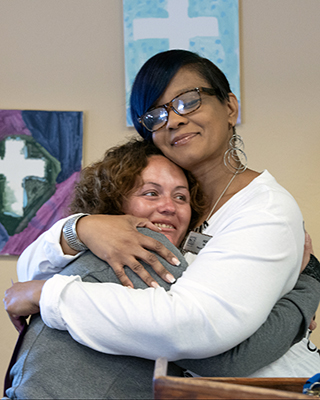 Life grew more and more troubled. During a fight with her boyfriend as she was trying to protect her children, he broke her nose. Someone called the authorities, and Roseann was horrified to watch her children taken away.

She negotiated placement with her aged grandmother, and eventually regained custody. But then her brother committed suicide, her boyfriend went to prison, and her car broke down. She found herself walking in the crushing desert heat with her 7-year-old and 4-year-old in tow. “It was just horrible,” Roseann says today. But she absolutely could not stop the drugs.

When her daughters found her passed out in the bathtub from an overdose, the authorities placed the children in foster care. In the hospital, it took Roseann three days to wake up. Still, her addiction had a vice-like grip on her and she was soon back on the street, getting high.

She was lost. It seemed impossible that anything good could ever come of her life.

Thankfully, God had not given up on Roseann. He knew her past, He knew her pain and He had a much better plan for her future. Your love opened the door for her to receive the blessings God had prepared in advance for her, a place of hope for the first time in her life.

At first, she couldn’t believe God would help her. “I was such a bad person,” she says. But the beautiful truth is, God’s love would not be denied. Day by day, Roseann grew stronger. Healthier. More hopeful. More confident. As she opened her heart to God, she broke free of her addiction for the first time since the age of 10.

As our dedicated team journeyed with her, we witnessed her transformation. Your support for Gospel Rescue Mission “completely changed my whole life,” she says today.

She burst into tears, seeing her children again. “Mom!” the girls squealed, jumping on her and squeezing her. After a successful transition period, the judge granted her custody.

“Here at Gospel Rescue Mission, life has just gotten really good,” Roseann says. She’s clean and sober, and walking with God. Her children are thriving in school. Roseann has a job. She’s working on securing a home of her own — and becoming a Certified Nursing Assistant. Thanks to you.

But another mom in crisis — battered by life — will need help tomorrow. So I pray you’ll give again today, to open our doors, to offer safe shelter and nutritious meals, and guidance and love … new life through faith in Christ.

Would you please be as generous as possible today? I hope to hear from you soon.

P.S. From the very beginning of Roseann’s life, the enemy sought to destroy her. But God had a better plan. In spite of all the horrors she endured, in spite of the terrible choices she made, God placed you in her path, and she found freedom. Please help others in desperate need by giving your best today. Thank you again!