This 9-year-old 4H Future Farmer knows the power of giving back.

Walter was born prematurely at just 25 weeks, and his parents faced considerable emotional challenges in the early months of his life. During his hospitalization, his mother had a tough time finding clothing that was small enough for his fragile body while still leaving access to all the lines and tubes vital to his care. So his mother, Amanda Huhta, determined to ensure his comfort, created a shirt specially designed for preemies. In 2016, Amanda wanted to help other mothers facing the same challenges, so she began making the shirts and shipping them to parents of premature babies across the United States. Their story went viral. 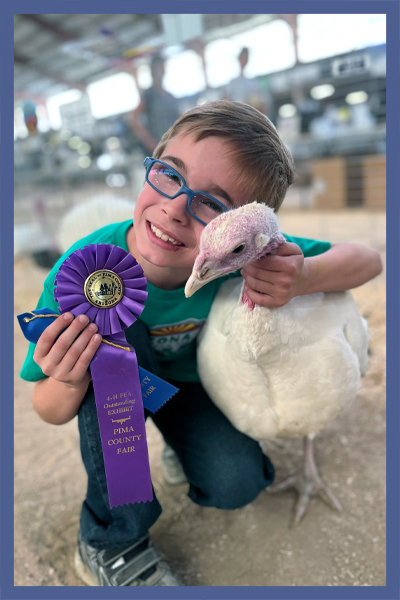 This Thanksgiving, Walter is inspiring people in a different way. This bright young man developed an interest in animals and farming while in 4H, so he bought and raised a poult (a young turkey). For six months, Walter raised it from a chick. Watching it grow. Then, at the Pima County Fair, he won a purple ribbon and was immediately offered $2,600 for his prize turkey—an incredible sum for a 9-year-old. When his parents asked him what he wanted to do with the money, he said, “I want to donate to Gospel Rescue Mission.” Walter had heard our commercials, and Amanda had told him about the plight of the homeless and the difficulties they face. With a compassionate heart for people suffering in our community, Walter wanted to make a difference. This past month, he toured the Center of Opportunity with his family to meet the staff and find out how a donation would help people experiencing homelessness. And he had many questions. In the end, Walter presented Lisa with a cash donation to help men, women, and children this Thanksgiving.

Jesus performed many miracles in the Bible, but the feeding of the 5,000 was so important that it was recorded in all four of the Gospels. This miracle teaches us what can happen when we share our loaves and fishes (or turkeys) with others, giving thanks to the Lord. This young man shared his first fruits with the hungry and hurting in our community, as a gift unto the Lord, and we can’t wait to see how many baskets will be left over at the conclusion of this Thanksgiving season!
Thank you, Walter!